The land of champions

Along the roads of Romagna, as light as the wind, cycling between the coast and the hills, through nature and history, discovering a territory that is like an oil painting

For everyone in Romagna, cycling is like a religion. Amateurs, professionals and enthusiasts, not a single weekend goes by without us getting on our bikes and cycling along the roads of this land that is so generous, with its hills and long expanses on which to ride freely, enjoying the fragrances of the sea on the horizon.

Living as if we were always on holiday, cycling along ever-changing itineraries, from the more gruelling that take all day, to the easier ones that take just a few hours. Surrounded by an ever-changing landscape that spans from the tranquil countryside near Ferrara to the relaxing coastal stretch, to the gentle hills near Rimini and the steep slopes of the Apennines.

Passion for cycling: that’s what made Marco Pantani the Pirate, one of the sport’s unforgettable champions, who helped us dream thanks to his incredible uphill breakaway attacks. Here, throughout the year, professionals and enthusiasts train to compete in the top competitions and fight it out in long-distance races, like the legendary Nove Colli: truly unmissable events, thanks also to the presence of hundreds of sports clubs dedicated to training new talents.

If bicycles are your passion, if you love discovering small villages hidden away on lush green hillsides and you like to enjoy a delicious break between cycle rides, Romagna is the perfect destination for your next holiday. In the provinces of Ferrara, Ravenna, Rimini and Forlì-Cesena, you’ll find an infinite number of cycle paths that will help you discover mediaeval villages, food and wine excellences and the enchanting nature of Romagna.

And if all this were not enough, you’ll also find a selection of the territory’s best accommodation facilities here, from bike hotels certified by Terrabici, to hotels, campsites and guesthouses, as well as a series of offers for your next cycling holiday in Romagna.

Cycling towards a wonderful park

It is in spring, when nature reawakens and the landscape comes back to life after a long winter that on the roads of the Po Delta Park it is possible to admire the colours of its flora and fauna. Intoxicated by the breeze on the longest cycle path in Italy, that stretches 125 km along the right bank of the Po, it is possible to cross Romagna from its western tip in the Province of Ferrara, east towards the Po River Delta and the Adriatic Sea.

Where the allure of nature merges with charming villages and small towns rich in culture and history, the Po Delta Park is an enchanted land. Starting in the city of Ferrara, the undisputed homeland of the bicycle, it is impossible not to lose yourself in the landscapes, perennially suspended between the land and sea, where the flight of flamingos and the call of the deer make every ride a moment of pure pleasure.

It is the great river that indicates the way to the sea, along paths and trails that are a pure delight. Beaches, oases, salt mines and pine forests give life to a mix of natural worlds and landscapes, constantly suspended between the land and fresh and sea water, with its legacy of the historic and artistic traditions of life in the delta and the surrounding cities. Boat trips and bike trails make it easy to visit the Valleys of Comacchio and discover all their natural beauty.

Along the salt road

Salt roads are not simple paths or trails, but authentic experiences that take us from Cervia to Comacchio, hurtling through Ravenna to the enchanted landscape of the Po Delta Park. In the heart of Romagna, the salt mines and their history are the “white gold” that helped the city of Cervia to flourish in 1274, when trading in salt began.

Between the salt mines and pine forests, from Cervia to Comacchio, what stands out is the delicious flavour of eels, the lightness of clams, the fragrance of fried seafood and the intensity of grilled anchovies seasoned with lemon zest.

The Salt Mine of Cervia, a station in the south of the Po Delta Park, which has always been known as the “City of White Gold” and that reached its splendour under the influence of Venice, boasts an ancient history. It still produces salt using ancient methods; this is done “in differentiated basins”, in other words, by moving seawater from one basin to another, combining the action of the sun and the wind. Salt is harvested once a year in August and what is produced is a sweet whole salt, ideal for cooking and now a select ingredient used by award-winning chefs.

From the sea to the hills and as far as the Apennines, the lands between Forlì and Cesena are a succession of nature and culture, a delightful, ever-changing sequence of environments and buildings. Hills and mountains, the dual soul of the inland area near Forlì embraces all cycling enthusiasts, from those who choose the more demanding route, to those who wouldn’t turn their nose up at regenerating stops, because the beauty of Romagna is a gift for all.

Even the greatest cycling enthusiasts like to pamper themselves now and then. In this land of wellness, between Fratta and Castrocaro, enjoy the relaxation offered by the thermal spas that still echo with the splendour of the Roman Empire. The gently-rolling hills give way to the harsh mountains: in the deepest inland areas of the Province of Forlì soar the Apennines that are a delight to climb by bicycle, preferably by mountain bike. But the mountains, like the sea, never fail to reward great effort, with the enchanting natural beauty of the National Park of the Casentine Forests, Mount Falterona and Campigna.

Where the sea embraces the hills

On dirt tracks and roads, cycling quickly along the hills into the wide Marecchia and Conca Valleys. Constantly climbing and descending roads that castles, fortresses, towers and bell towers have stood on for thousands of years: nature, history, art and gastronomy and spectacular landscape that is a myriad of shades of green, always silently embraced by the sea.

Living in Romagna means being constantly suspended between the fragrances of the land and the sea. A cycle ride, from the Riviera to the inland area near Rimini, almost always becomes a culinary experience to share with fellow cyclists. Piada, still warm, a river of cappelletti in broth and ever-present Sangiovese red wine.

Experiencing history while cycling, immersed in the memory of the Malatesta and Montefeltro families whose legacy can be found throughout Romagna. Imposing fortresses and charming villages - from San Leo to Montefiore, from Verucchio to Santarcangelo - are alive with the roar of the troops of Sigismondo Pandolfo Malatesta, Lord of Rimini and Federico da Montefeltro, Duke of Urbino, who fought over these beautiful lands between the Middle Ages and the Renaissance.

Via Romagna, the permanent route

A 462 km-long route that’s cycling tourist-friendly and passes through art cities, historical villages and the natural wonders of Romagna

Last but not least, there’s a proper festival on the beach in Rimini entirely dedicated to cyclists: it's the Italian Bike Festival, where you can celebrate every aspect of the world of cycling and its heroes. 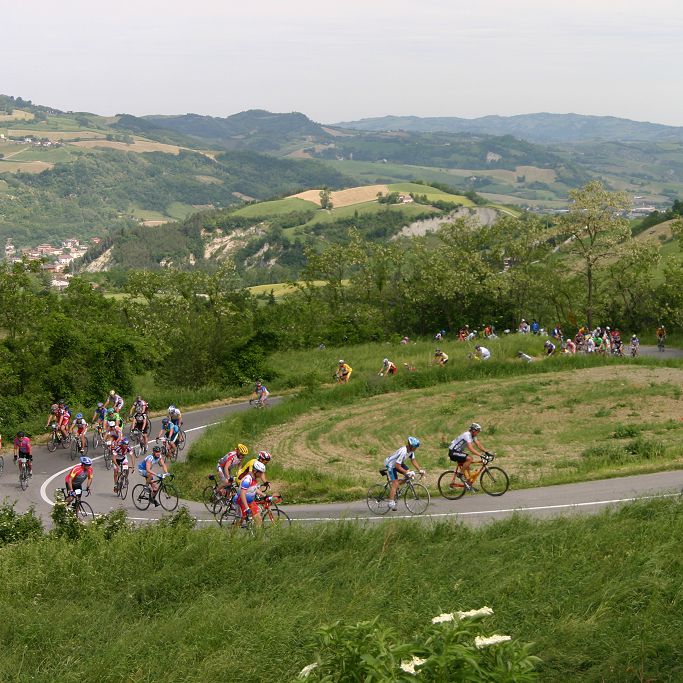 Experience the events of Romagna

Go to the list of events in bike theme. 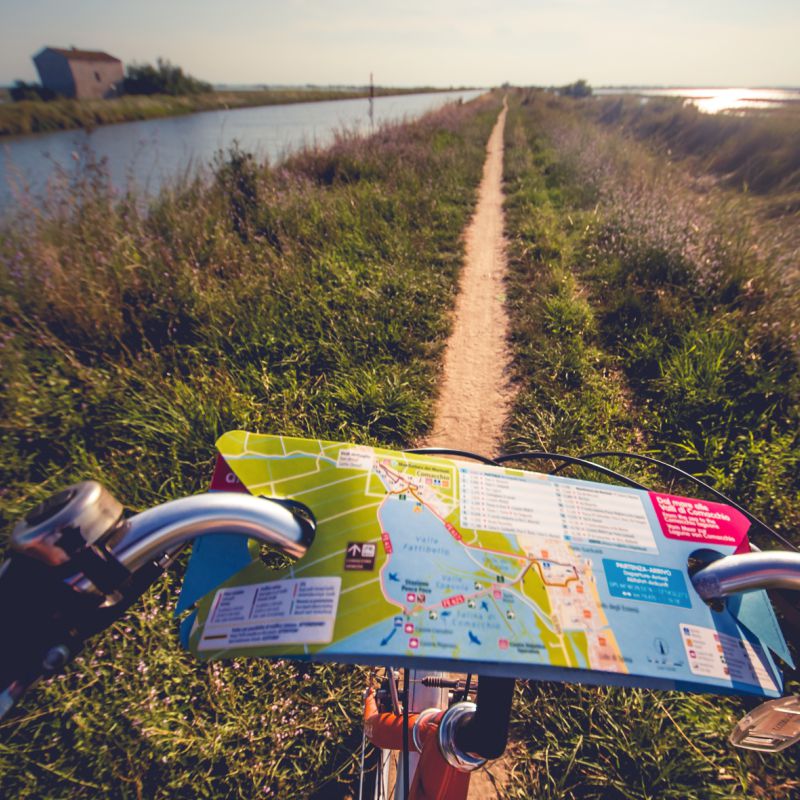 Discover the itineraries of Romagna

Go to the list of itineraries in bike theme. 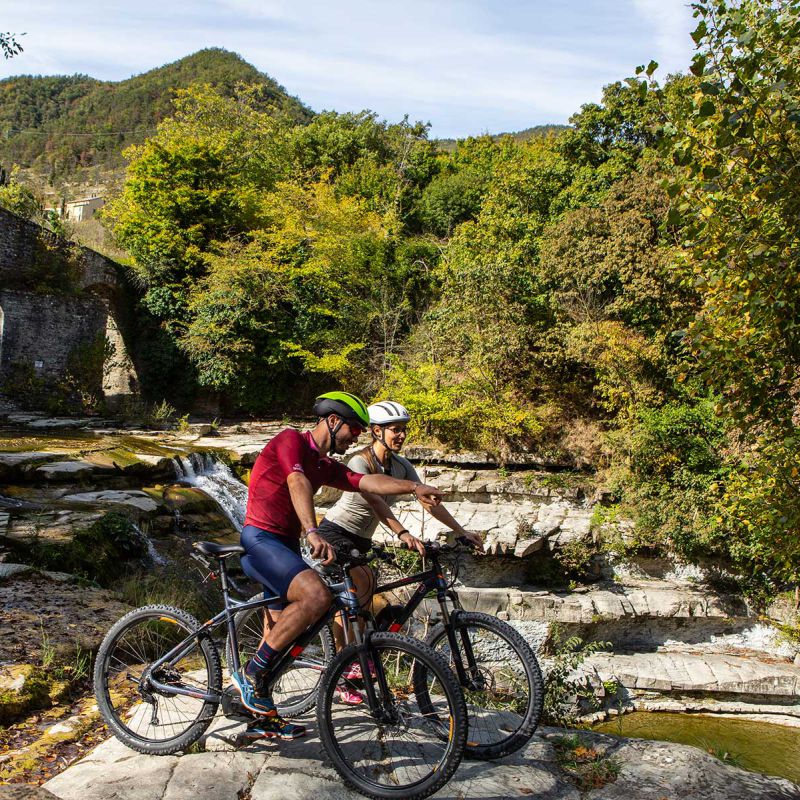 Discover the experiences of Romagna

Buy an experience in bike theme.