The land of kings and emperors. It was in the very heart of Romagna that the New Roman Empire was born

“Let us advance whither the prodigies of the gods and the injustice of our enemies call us. Let the die be cast!”
Gaius Julius Caesar

The land of kings and emperors. It was in the very heart of Romagna that the New Roman Empire was born, when Julius Caesar, the de facto emperor, crossed the Rubicon River, creating a net division between history up to then, and what was to follow.

In this sun-kissed land, the Roman Empire with a “western flavour” set its roots. Among findings and traces of ancient architecture we still perceive the echo of the splendour of the capital Ravenna and of a Rimini that was the hub of commerce and connections with Rome, along which remarkable “flowers” and great authors of Latin literature were born: Sarsina, the land of the great poet and playwright Titus Maccius Plautus, and Bagno di Romagna, a place where to this day the spa waters are synonymous with beauty and relaxation.

With over 22 centuries of history, what is an international tourist destination today, the town that was once called Ariminum was the junction of important roads that linked the north to the centre of Italy. Rimini was, in fact, the protagonist of two great works commissioned by the Senate in Rome, two consular roads: the via Flaminia and the via Emilia. The first one connects Rome to Rimini, and ends at the Arch of Augustus. While the via Emilia starts at Tiberius Bridge and extends as far as Piacenza for 262 km, crossing the greatest wonders of the region.

“The die is cast”, in the footsteps of Julius Caesar

A forward-looking politician and military strategist, Julius Caesar’s proud, brave personality blends perfectly with the temperament of the people of Romagna, which is tenacious and full of vitality. It all began by the Rubicon, the river that the commander had the daring to cross, thus entering the lands of Rome returning from Cisalpine Gaul: on 10th January 49 B.C. to the cry of “Alea iacta est” Julius Caesar made history, turning Romagna into the beating heart of the empire.

The crossing of the Rubicon has always been shrouded in a halo of fascination and mystery: the exact place has often been the subject of research, and there have been many disputes as to which river was crossed by Caesar. Today, the most credited hypothesis is that the area is in Calisese, part of Cesena, on whose narrow country roads a bust of Julius Caesar has reminded us for centuries of his famous battle cry. Moreover, nearby, a sign on a bridge that was blown up by the Germans in October 1944 states that this is “the historic Rubicon River (Urgòn)”.

Wandering around the streets, memories, and great monuments: there is nothing better than to wander through the history of Rimini and look towards the Arch, which Augustus had built in 27 B.C., a testament to a city that was open to other peoples, and sip an excellent Sangiovese. While from Tiberius Bridge, which was built in 14 A.C. according to the wishes of Augustus, you can look towards the sea. Ariminum has been enriched by the unearthing of a small Pompei with the finding of the Domus of the Surgeon, which you can visit in Piazza Ferrari, with wall mosaics, and the richest and most complete set of surgical tools from the Roman world. In the forum of Piazza Tre Martiri you can feel the heartbeat of a powerful, thriving town; along the via Emilia you can head towards modern Mediolanum, and along via Flaminia you can already perceive the heat of the Eternal City.

Mare Nostrum, the power of the Empire

The Roman Empire was not just synonymous with might; it was also extremely vast, to the extent that the name “Mare Nostrum” was coined to indicate how far its dominion extended: the Italian Peninsula, the Balkans and Anatolia, the coasts of Spain and North Africa… the borders of ancient Rome seemed never to end. Ready to challenge the seas and defend the borders from outside attacks, the impressive naval fleet guided by Octavian Augustus, who chose Ravenna and the Port of Classe as a base, controlled the inner area of the Eastern Mediterranean.

The dream of many youngsters was to become a sailor of the Classis Ravennatis, the imperial fleet of Octavian Augustus who found a haven in the Port of Classe. Brave and tireless, from the port they would look to the sea, which seemed to join the land in a dance of waves and sand dunes. Sailors from all over the world, seeds and wine, villas and noble dwellings, Latin, Greek and Persian: everything flowed into a single echo of the sea, offering a spectacle of bustling and lively daily life.

On that day, the Adriatic surprised all the sailors with very high and mighty waves that crashed against the ships. Prayers and tears served no good; the sea became so rough that it tore the ships apart. On one of them, the liburna “Aurata”, because they said that it shone on the sea, the young Capito, drifted for days in the freezing waters, carried by the current until his death in the Mare Nostrum, which became his tomb. “A Capito, optio della liburna Aurata” states the headstone that is dedicated to him, and for the people of Romagna it is still moving to see the image of this brave young man in Classis Museum in Ravenna.

In Romagna everything speaks of ancient Rome: the monuments tell us of its greatness, the buildings are a testament to its power, the walls and the timeless treasures testify to its creative spirit. Here, where the sea meets the land, we absorb the feeling of greatness from birth, when they tell us that ours was a land of revolutions and courage, and of the union of peoples.

Ravenna affords the timeless beauty of the Domus of Stone Carpets, one of the most important archaeological sites in Italy to be discovered in recent decades. The domus is inside the eighteenth-century Church of Sant’ Eufemia, in a large underground area which is located around 3 metres below the road surface: there are 14 areas which are paved with multicoloured mosaics and marble taken from a private Byzantine building of the 5th-6th century. The beauty of the mosaics stands out with geometrical, floral and figurative decorations that are considered unique such as the “Dance of the Genies of the Four Seasons”, a very rare representation that portrays the Genies dancing in a circle, and the figure of the “Good Shepherd”, portrayed in an original way which is different from the usual Christian representation.

You will know right away when you are in Ravenna, as it is impossible not to walk with your head turned up, enchanted by the Starry Sky commissioned by Galla Placidia, by the mosaics and marble decorations of the Domus of Stone Carpets, by the golden apse of Sant’Apollinare, and the grandeur of the Mausoleum of Theodoric. A Byzantine soul floats through the narrow streets of this city, where, if you listen carefully, you can still hear the voice of Justinian in all its might.

Romagna is a land brimming with natural and artistic masterpieces. The first capital of the Kingdom of Italy thanks to Justinian, who turned it into a flourishing city on a par with Constantinople, Ravenna preserves many treasures of Byzantine art. This period marked a momentous turning point in how reality was represented in the artistic sphere, clearly setting itself apart from the interpretation given by classical Rome. Reaching beyond nature, breaking every mould, enveloped in the purest shimmer of gold, the whole of Ravenna speaks of experiences that are beyond the human dimension.

They say beauty never dies, and that, to the contrary, it can strongly affect the observer, who may even feel bewildered by it, which is what you may experience when you admire the Mausoleum of Galla Placidia, the Arian and Orthodox Baptisteries, the Basilica of San Vitale, the Basilica of Sant’Apollinare Nuovo, the Basilica in Classe, and the Mausoleum of Theodoric. A UNESCO World Heritage Site, and the pride and joy of Romagna, Ravenna and its surrounding areas have always thrived on art and beauty.

A place to meet and relax in even more than a place of wellbeing and rest, the Roman baths were like a city within a city, bringing together men and women, the rich and the poor, who, at different times and in different areas, would indulge in a relaxing bath with bare feet. And it is still a pleasure today to bathe in these waters in the Spas in Castrocaro, Fratte or Bagno di Romagna, experiencing the feelings of 2000 years ago.

Find the archaeological site closest to your next destination. 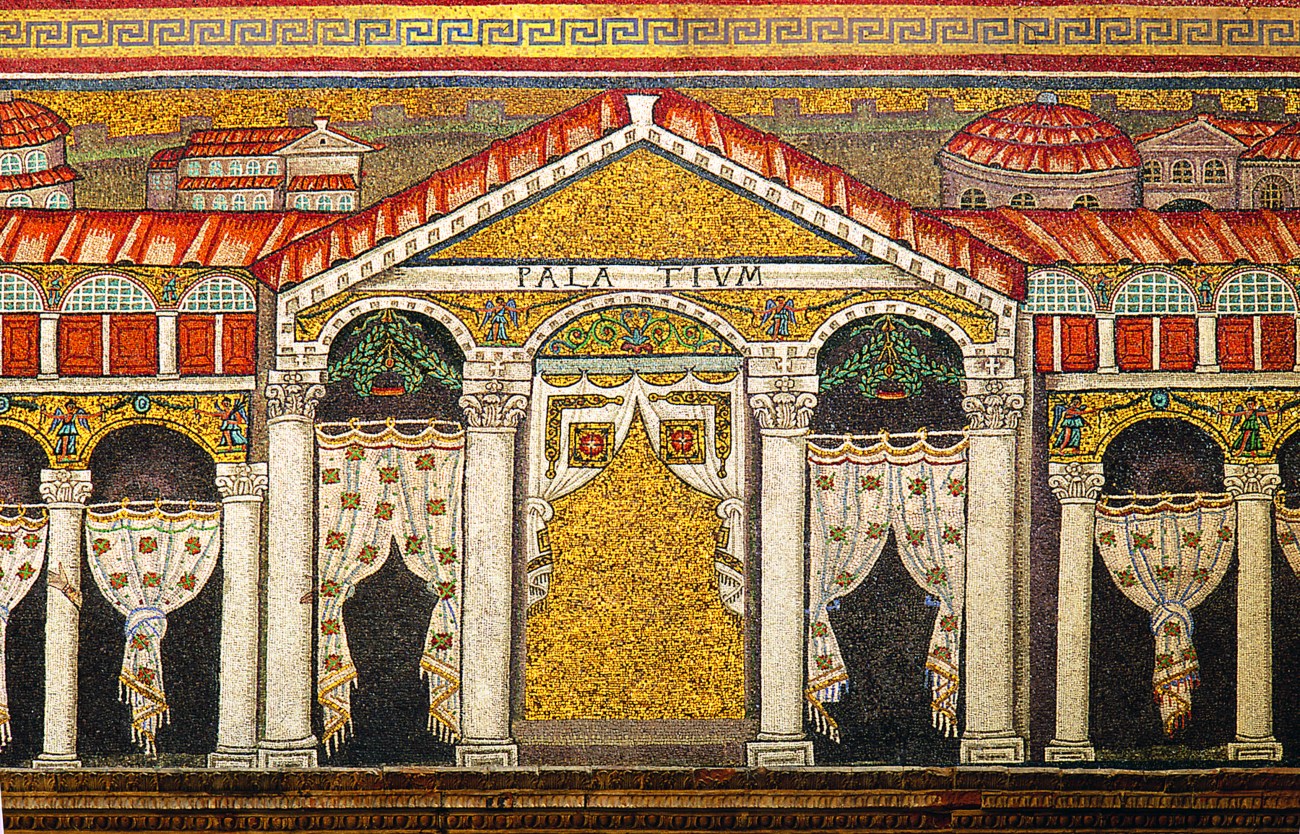